We’ve all seen it from the Rambo and Tarzan movies; it’s called the Punji trap. You dig a pit about six feet deep, fill the bottom with dozens of  sharpened bamboo sticks, and then span the top with thin branches, fern leaves, and so forth to disguise the pit. The unsuspecting enemy walks over the Punji trap and falls in, becoming a human kebab, very grisly and very effective. So the question is, has Speaker of the House Nancy Pelosi laid a Punji trap for President Trump and the Republicans?

Let’s start with a bit of history. In making a routine diplomatic phone call from the White House to newly-elected Ukrainian President Volodymyr Zelensky, professional staffers from the State Department and Intelligence agencies listened in, to take notes and maybe advise President Trump. During one of these phone calls, President Trump drifted far from the carefully-prepared topics. He attempted a shake-down of Zelensky to get Ukraine to investigate a nutty conspiracy theory, dreamed up by the Russians, to manufacture dirt on his most prominent political rival, Joe Biden.

You know the story, Trump withheld Congress-approved military aid until Zelensky agreed to announce these bogus investigations. One of the professional employees from the Intelligence services was so disturbed by Trump’s action that he filed a whistle blower’s report that Trump’s Attorney General tried to bury. In the end, Nancy Pelosi and Congressman Adam Schiff found out about it, and the impeachment of Donald Trump commenced very rapidly.

Now you might ask, why bother with impeachment when it’s evident that the Republican Senate will never vote to convict and remove President Trump? Trump is a raving racist and lunatic. Still, the Republicans love the gutting of government regulations,  the appointing of far-right, mostly unqualified judges, and the trillion-dollar tax cut for the extremely rich. So, there is no way they are going to vote to convict in the Senate.

In the shadow of guaranteed dismissal by the Senate, Nancy Pelosi pressed on, and the House of Representatives sent two articles of impeachment to the Senate floor. The House Managers, led by the articulate and quick-thinking Congressman Adam Schiff, made a masterful case against Trump, causing Republican Senator Lamar Alexander to admit:

“It was inappropriate for the president to ask a foreign leader to investigate his political opponent and to withhold United States aid to encourage that investigation. When elected officials inappropriately interfere with such investigations, it undermines the principle of equal justice under the law.”

Anyone who watched the impeachment trial (I watched as much as I could stand) knows that the White House lawyers and Republican Senators never defended Trump against the charges, they rambled on and on about process, most of their points being outright lies. Nobody defended Trump’s character or involvement in this Ukraine mess. He is as guilty as hell, even in Republican eyes. They say: “Maybe he is guilty, but I’m not voting to remove him from office.”

When the Republican Senate lets Trump skate away scot-free later in the week, is that the end of it?

Nope, not a chance. Nancy has sprung her Punji trap on the Senate Republicans. Here’s how it might work.

Do you think Trump will stop lying? His weekly hate-rallies are getting more and more bizarre, with insults, sniffing (Adderall), slurred words, and unabashed racism. His policies, favoring his good buddy Vladimir Putin, will get more extreme. Look at how Russia is now calling the shots in the Middle East. Trump’s impeachment team did not disclose that Pat Cipollone, White House counsel  and member of the impeachment defense team, was himself a witness to the Ukrainian political scheme. That’s lying to Congress under oath and probably a reason to disbar Cipollone.

The supposed tax cut went solely to the mega-rich, and by 2025 will increase taxes on the middle class. The stupid trade wars have been a bust also, with Trump backing down to earlier trade deals. Farm bankruptcies are incredibly high this year. Even the $25 billion Trump spent to bail out farmers went mostly to the big corporate farms. The family farms got screwed royally.

Trump’s immigration policies, already a paragon of cruelty, will get worse as the election approaches. His plans seem prompted by what works best at his rallies, so railing against immigrants of color will inevitably get worse, with the MAGA-hatted cult eating it up.

Here’s where Nancy Pelosi’s trap is brilliant. Assuming that there’s a groundswell to vote Trump out, the Democrats can hang the yoke of the Trump impeachment acquittal on every Republican Senator up for reelection. They’ll say, for example, to Senator Cory Gardner: “Where were you when the nation needed you?” If Trump continues to get worse, Gardner will look like a spineless sycophant, a Trump lick-spittle. In swing states, this may make all the difference. It’s not that we have to vote out Trump. To repair the Trump damage to the nation, The Democrats have to get control of both the House and Senate. Only then will the country be healed.

Of course, this Pelosi trap requires one thing. President Donald Trump continues to get worse. Frankly, I think that’s a pretty sure bet. As we run-up to November, the slogan a majority will be muttering under their breath will be:

FLUSH THE TURD ON NOVEMBER 3RD

Maybe I’ll buy one of these T-shirts. 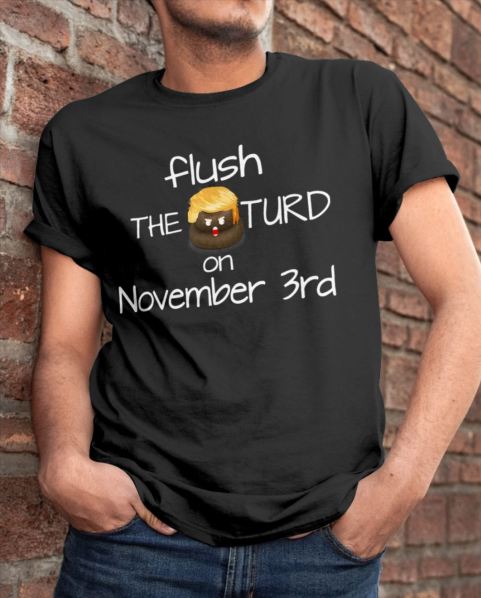 View all posts by lynchzilla